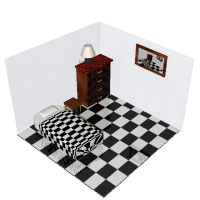 On a BBC comedy show called Porridge, Ronnie Barker (Fletcher) commented that sleep was the only escape for a prisoner. This is a certainty, as I discovered during my six years at Jericho Hill School for the Deaf and Blind.


But sleep need not be a mere escape from dreary reality. My dreams are sometimes cinematic. For example, I sometimes dream that I'm accompanying Doctor Who, played by Tom Baker, as he battles aliens throughout space and time. And unlike television, my adventures are in full colour and with no commercial interruptions.

I've also dreamt that I was in episodes of Get Smart or Hogan's Heroes. Each one of those adventures seems real until I awaken to find myself in my own bed.

Most of the time, my nocturnal journeys are into my past but with some elements of modern life. For example, I dreamt that I was a young man and I bought a new house with a huge gymnasium in the basement. People from the shopping mall next door had used it for basketball games and didn't know that I was now the new owner. No matter how I threatened them, they wouldn't leave. The police officer whom I called on my flip phone just said he'd call me back and hung up.

Some folks in the Bible actually had dreams sent from God. As Peter said to the citizens of Jerusalem in Acts 2:17 (KJV), "And it shall come to pass in the last days, saith  God, I will pour out of my Spirit upon all flesh: and your sons and  your daughters shall prophesy, and your young men shall see  visions, and your old men shall dream dreams:"

I never have had prophetic dreams and neither have others I've befriended, though they claimed that they did. Even so, I can tell from my nightly cinema screenings that my mind has plenty of issues to work out.

So, what do you think of the song and what I wrote? Please comment in the box below. But if you'd rather not, have a beautiful weekend.
Posted by Bruce Atchison - author at 12:08