What Can You Do to Escape Hell?

Bearing in mind what I've written in the past few posts, the answer is obvious. God is calling everybody through Christ and his followers to turn from their rebellion against him.

Paul and Barnabas gave the right answer which is recorded in Acts 14:15 (KJV). After healing a lame man, local people jumped to the conclusion that their gods had come down to them in the fashion of men. The priests of the false gods were ready to sacrifice animals to them.

Paul restrained their misguided actions with these words, "And saying, Sirs, why do ye these things? We also are men of like passions with you, and preach unto you that ye should turn from these vanities unto the living God, which made heaven, and earth, and the sea, and all things that are therein:"

The next step is to follow Christ, obeying his teachings. The first step of obedience is being baptized as a public display for  the world to see. Christ said in Mark 16:16 (KJV), "He that believeth and is baptized shall be  saved; but he that believeth not shall be damned." This shows that baptism is for those who trust in Christ and want to obey his commands. 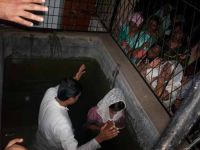 But the  work of following the Saviour doesn't end there. Romans 12:2 (KJV) states, "And be not conformed to this world: but be ye transformed by the renewing of your mind, that ye may prove what is that good, and acceptable, and perfect, will of God."

One thing I never was told about when I was a new believer was the need to gather with fellow Christians. Hebrews 10:23-25 explains why. Here's how the Bible in Basic English renders these verses:

23  Let us keep the witness of our hope strong and unshaking, for he is true who has given his word:
24   And let us be moving one another at all times to love and good works;
25   Not giving up our meetings, as is the way of some, but keeping one another strong in faith; and all the more because you see the day coming near

Discipleship is highly important for new believers. Had I been mentored by mature believers, I wouldn't have ended up in a toxic house church which taught blasphemous doctrines. I wrote how the Lord led me out of error and into truth in a book called How I Was Razed. Follow that link to learn more about this wondrous miracle.
Posted by Bruce Atchison - author at 11:59

Email ThisBlogThis!Share to TwitterShare to FacebookShare to Pinterest
Labels: Acts 14:15, Bruce Atchison, Hebrews 10:23-25, How I Was Razed, Mark 16:16