WAS A CHURCH PAINTING PROPHETIC? 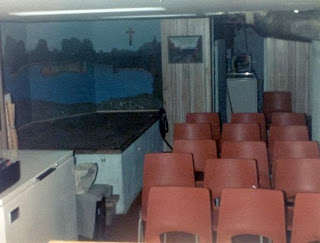 When I think back to the fifteen years I spent in a toxic house church, I notice how superstitious the elders of it were. This is especially true when it came to its leader and his supposed visions. One of them involved a painting on the plaster of the basement wall above the baptismal tank.

When I returned from my summer holidays at my parents place to the house church, I immediately noticed that somebody had painted a picture of a river and impossibly steap green hills behind it. When I remarked about it to Sister Roberta, she crowed, "Brother Herald had a vision. He saw the city of refuge in the Nahanni Valley  mentioned in Revelation Chapter twelve."

As I admired the painting, Sister Roberta continued, "The swirles in the plaster matched exactly the hills and river in the vision so we painted them."

I stood and gawked in amazement at this supposed vision. We had been taught that when the mark of the beast was imposed on the world, the weak christians would be taken to a city of refuge in the Northwest Territories for three and a half years. The able-bodied Christians would fight the mark of the beast while the young and infirm believers would be kept safe in that northern location.

Now I realize that what we had been taught was completely wrong. The books of the Bible were written for us but not to us, as Hank Hanegraaff of the Bible Answer Man show rightly says. Consequently, the last book of the Bible was written to seven churches in what now is the nation of Turky.  Though we learn much from Scripture, none of it was written to twenty-first-century believers.

In Revelation 12:1-6, John portrays in symbolic form the life of Christ. The woman is Mary who fled to Egypt with Joseph and the Christ child.  The readers of the letter that John wrote to the seven churches would have recognized the allusion to Old Testiment apocolyptic language immediately. John used it to amplify his message to these congregations. That's why Revelation seems such a mysterious book to us. We can't relate to Old Testiment figures of speech. For more on the subject of the Bible being written for our instruction but to ancient peoples, check The Christian Research Institute's web site.

If I had only known how to read the Bible for all it's worth, and all its wealth, I would never have fallen for a blasphemous minister and his twisted lies. Even so, I feel that God wanted me to publish How I Was Razed: A Journey from Cultism to Christianity. Amazon, Barnes & Noble, and Virtual Bookworm Publishers.
Posted by Bruce Atchison - author at 00:00