WHY I HAD THE CHRONIC BACK-TO-SCHOOL BLUES

Most parents understand why children wish they didn't have to go to school. After two or three glorious months, depending on the country, the fun and carefree times suddenly end.

I had an additional reason for dreading my return to school, namely that it was five hundred miles away and I wouldn't return home again until Christmas. Worse yet, no adult agreed with me that the finest facility without freedom still resembled a prison. From Deliverance From Jericho (Six Years in a Blind School), here is one example of my complaint going unheeded.

Suddenly it was September. "Time sure flies during the holidays," I complained to Mom one day. "It seems to speed up during the summer and drag by when I'm at stupid old Jericho jail."

"It isn't like that at all. The days are all the same length." Mom suddenly changed the topic. "How come you don't like it there at Jericho? They have a swimming pool and a bowling alley. You should be grateful for the three meals a day that they give you. You get a bed to sleep in, and they have special teachers there. Many kids in poor countries would love to go to school, you know."

What could I say to adequately express the longing in my heart to stay home and live a normal life? She never had supervisors watching over her. How could I verbalize to Mom that being with the school bully twenty-four hours a day was oppressive? How could I explain my feeling of injustice regarding the Vancouver students being able to go home every afternoon while I waited for months? Since I realized the futility of my situation, I said nothing.

I felt extremely homesick as Dad drove me once more to the airport. It was as if I had a bottomless pit inside me and my heart was in freefall. I gazed longingly at my home town and waved farewell to it until it vanished from site.

"Why do you keep waving like that?" Dad asked, clearly baffled.

"What's wrong with going to Jericho?" Dad asked after a prolonged silence. "They give you three square meals and a bed. They teach you and take you out to all sorts of places. Don't you know there are children starving in India?"

I tuned out, realizing that he failed to understand as well. Adults had given me that sort of speech often in the past and it only demonstrated their total insensitivity to my feelings. Both parents failed to realize how Jericho was affecting me.

Deliverance from Jericho contains many more vignettes of what life was like in that government-run institution. These range from poignant experiences of homesickness to hilarious incidents of mischief. Click here to read more about this book and to order it. You may also e-mail me directly for more information.
Posted by Bruce Atchison - author at 11:04 2 comments: Links to this post


One characteristic of children is that they take things quite literally. My sister and I were no exception. From Deliverance From Jericho (Six Years in a Blind School), here is the story of how we tested the claim of a manufacturer's "unbreakable" jug of vinegar in the summer of 1966.

"It says here that this bottle is unbreakable," Diane informed me one evening.

"Let's toss it down the stairs and see if it really is unbreakable," I challenged.

Standing on the landing in front of the basement stairs, jug in hand, I hurled it as hard as I could. The bottle bounced around in a most satisfactory and hilarious way.

"Let's throw it down the stairs again," I exclaimed and retrieved the jug.

Diane tossed it down with the same amusing results. Since the third time is the charm, or so people say, we thought that the bottle would last once more.

That's when our experiment went horribly wrong. The bottom of this allegedly unbreakable bottle split, sending a flood of vinegar all over the bottom landing and into our bedroom. "Oh-Oh!" both of us exclaimed.

Aroused by the racket of our "research," Mom raced to the stairway and caught us in the act. "It wasn't us Mom; it was Linda," I explained. Diane heartily agreed.

"You kids clean that up," Mom ordered. She was not fooled for a moment by our doubly lame excuse. Linda, a toddler and barely able to stand, did not even have the strength to drag the jug out from under the kitchen sink.

Both of us felt ill at the unpleasant prospect of cleaning up. Gagging and coughing, we mopped up the mess, astonished at the unbelievably powerful stench. Diane and I resolved never to toss vinegar bottles down the steps

Deliverance from Jericho contains many more vignettes of what life was like in that government-run institution. These range from poignant experiences of homesickness to hilarious incidents of mischief. Click here or
e-mail me for more information about this book and how to order it.
Posted by Bruce Atchison - author at 11:34 1 comment: Links to this post 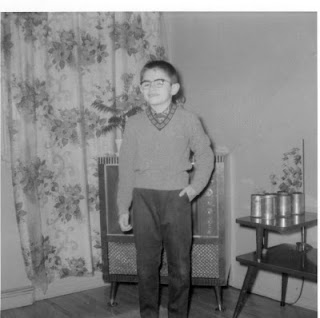 Isn't it amazing that there are college students today who weren't even alive during the fall of the Berlin wall. This thought often gives me pause as the ominous tension between America and the Soviet Union was a factor for a large part of my life. Though there has been some political conflict between Russia and the U.S. of late, it can't be compared to the impending threat of nuclear annihilation that we post-war children lived with each day.

My family's home resembled a version of the divided city of Berlin in the summer of 1965. No concrete wall was erected and nobody was shot but the lines were quite literally drawn in our home. From Deliverance From Jericho (Six Years in a Blind School), here is the part where I arrived home after six months at that institution and discovered the sad state my family was in.

Unbeknownst to me, my parent's marriage relationship had worsened during my stay at Jericho. Mom accused Dad of seeing prostitutes. Meanwhile, Dad claimed that my sister Linda was fathered by another man since she had blue eyes. The tension set everybody on edge as we children dreaded what would happen next.

Home increasingly resembled a miniature version of Cold War Berlin. Suddenly, Mom designated two parts of the kitchen counter for my dad and the rest for us. Half the table was Dad's and the other ours. Mom also assigned him one stove burner, cupboard, some dishes, and fridge space. We never ate dinner together as a family after that time.

Mom moved her belongings into the bedroom where Linda slept and which once belonged to Diane and I. Dad slept alone in the master bedroom. Mom only let him sit in the easy chair in the living room while we used the chesterfield. Since life became extremely uncomfortable at home, Dad spent increasing amounts of time at the bar with his friends.

My parents rarely spoke to each other unless it was absolutely necessary. Mom ordered us not to talk to Dad, Whenever we disobeyed, she would interrogate us regarding what he said and what we told him. I hated being forced to take sides.

Though modern marriages fail frequently, it's still traumatic for the children. I can remember longing for a "real dad" who would stay home from the bar to play games with me and my siblings. Complicating matters was my poor vision and my brother's behaviour problem. Getting a divorce was much more difficult back then so my parents kept up their "cold war" until 1976 when Mom got a separation.

Though my memoir deals mainly with being at Jericho Hill School for the Deaf and Blind, I included vignettes of the times I spent at home during Christmas, summer, and three Easter vacations. The book is available by clicking here. I also have a short bio and When a Man Loves a Rabbit (Learning and Living With Bunnies) featured on the site.
Posted by Bruce Atchison - author at 09:48 1 comment: Links to this post


Most clergy are decent folks who understand about disabilities. Unfortunately, one man I met didn't. From Deliverance From Jericho (Six Years in a Blind School), here's how I was expelled from Vacation Bible School in July of 1968.

The Lutheran Church held Vacation Bible School again. As in previous years, I expected the usual cookies and Kool-Aid as I walked through the front doors. Much to my surprise, an usher sent me to a small room, which I suppose was the pastor's study. I sat at a polished oak table with approximately six other boys my age. Our teacher was the pastor, a gruff, no-nonsense, older man who wore a grey suit. As soon as we were seated, he plopped large black tomes in front of each one of us.

"Open your Bibles to First Kings," he ordered. Not only was I unable to read that tiny print but I had no clue where the book was located in scripture. Sighted folks had previously read the Bible to me or recited the stories so I had no idea of how to look up verses or even that the Bible consisted of sixty-six books.

"Why aren't you looking up First Kings?" the pastor demanded.

"I don't see very good and I don't have a magnifying glass," I explained.

"You're just being lazy. Either look up that scripture or get out of my class. You're here to learn, not fool around."

I felt too shocked to object. Could not this man realize that I was unable to find that book even if I wanted to? My thick glasses alone should have shown him that I had vision problems.

When I continued staring at the Bible and not looking up First Kings, he pointed to the door and said, "Get out! You're disrupting my class. Come on. Out!"

I shuffled through the front door of the church with my head hanging, my heart broken, and a resolution never to return.

The assistant pastor stopped me as I walked toward the street and apologized. "He doesn't really mean to be mean. Please come back for the rest of the Vacation Bible School."

"No," I said as I tried hard not to cry, "I'm going home." Though he was a kindly man, I had quite enough of church and of unreasonable sighted adults.

My expulsion astonished Mom. "How could he expect you to look up verses when you couldn't even read the Bible?" she exclaimed. I felt comforted that Mom was on my side for once. As a result of that pastor's misjudgment, I never attended his church again except for Diane's wedding nine years later.

This book, as well as When a Man Loves a Rabbit (Learning and Living With Bunnies), are available by clicking here or e-mailing me directly.
Posted by Bruce Atchison - author at 14:07 No comments: Links to this post