The day I snapped. 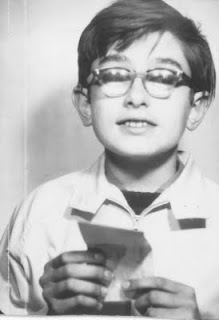 Charles Adler, a national talk show host, recently had a segment on his program regarding bullying in schools. He said that administrators aren't doing enough in confronting their parents about the harm their children's cruelty does to their victims. In my Deliverance From Jericho (Six Years in a Blind School) memoir, I had much the same problem with authorities not dealing decisively with my nemesis. Here's an excerpt that tells what happened when he finally pushed me past my breaking point.

Remembering our success with getting Mrs. Parker fired, I spoke to Mrs. Corrigan about the school bully. She listened patiently while I poured out my grievances with him to her.

The next morning, she came and called Charlie out of class. His face was brilliant fuchsia when he came back in. "Atchison, I'll get you for this," he threatened as he returned to his seat.

Terror seized me all through class. I had difficulty concentrating on the lesson. Never had I seen the school bully so angry. When recess came, I retreated to what used to be the swing set next to the junior boys' dorm. The adults had removed the swings and hung landing nets, the type marines use, in their place. Few students played on them since the novelty wore off rapidly.

Suddenly, I saw Charlie coming through the school doors. I quickly climbed to the top of the net to get away from him.

"You caused me a lot of trouble you know," he said. "Why did you have to tell Mrs. Corrigan all that stuff about me?"

I clung to the pole at the top of the former swing set, fearing the worst.

"I'm not such a bad guy," he assured me. "Come down and I promise I won't hurt you." I doubted that, having been tricked by him before. Fortunately for me, Charlie let me go without beating me up.

Charlie teased me as usual one evening at the Dining Hall. I tried to ignore him as the adults continually advised but to no avail. Anger and frustration built up in my mind as I ate. Before I had time to think, I lunged at Charlie and grabbed his throat. He pulled my hands away as he said, "whoa - wait a minute. I was only joking." Everyone at the table sat in stunned silence as I realized what I did. The school bully suddenly became apologetic and shocked. "You weren't really going to kill me were you?" he asked. Charlie was much kinder to me after that.

Though I believe revenge belongs to the Lord and I was wrong to literally take it into my own hands, he gave those in authority the responsibility of maintaining order and justice. Jericho's principal failed her God-given duty in that her lacklustre "talking to" only made Charlie angrier. This incident convinced me that bullies of all sorts, from school boys to terrorists, only respect superior strength. Appeasement is seen by them as a sign of weakness. Our politicians and school administrators would do well to heed the lesson I learned back in June of 1970.
Posted by Bruce Atchison - author at 11:42 No comments: Links to this post

One step closer to publishing my next book. 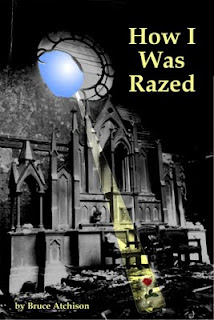 I'm pleased to present the cover art for my next book, How I Was Razed. This is a memoir of my fifteen years in a cult church, my rejecting god for nine years because he didn't heal my sight as they claimed he would, and my eventual discovery of authentic Christianity. If all goes well, it should be in print next year.

As I edit the manuscript, I'm continually astonished at the absolute nonsense I once believed. In the house church, their self-appointed and anointed teacher of God taught that we were once aliens, that even God was physically damaged from the radiation caused by the nuclear war in heaven, that the earth was created so we could be born into bodies not genetically damaged by radioactivity, and that we would colonize the stars once God made a new heaven and a new earth. He also taught that aliens were watching this planet to witness the manifestation of the sons of God and that we would someday evangelize the mutants throughout space. This false teacher further claimed in 1972 that Quebec would soon separate and lose a war with Canada, that the southwest United States would be uninhabitable, that ultraviolet tatoos would be put on us as identification which we could use to access our bank accounts, and that those refusing this mark of the beast would flee to a city of refuge in the Northwest Territories' Nahanni Valley. This pseudo-minister even claimed to have the stigmata and that cloths soaked with his blood would protect whoever bore them.

Being a naive convert, fresh out of Vacation Bible School in 1969, I had no idea just how blasphemous and crazy the notions this man taught as gospel truth actually were. Thanks to a series of personal mistakes and the influence of genuine Christians, I now know what the Bible really teaches and how to read it for all its worth. I hope that How I Was Razed will comfort those who had similar experiences and warn them not to throw the metaphorical baby out with the bath water. Writing this memoir has helped me too. Confronting the agonizing betrayals of my trust and taking them to God in prayer has helped ease the pain caused by those memories. As with writing the Deliverance From Jericho (Six Years in a Blind School) book, dealing with past hurts instead of hiding from them has actually eased my terrible feelings and nightmares. For more info on this and other wise biblical counselling, check the Hope For The Heart site. If you would like similar artwork for your project, check out the Hamtramck Idea Men site.
Posted by Bruce Atchison - author at 11:49 No comments: Links to this post

The shock of an exiled child.

Forty Five years ago on Labour Day, I believed I was merely going to a new school. Being only seven years old, I had no notion of how far Vancouver, British Columbia was from my home in Fort Saskatchewan, Alberta. Consequently, I assumed the airplain ride would be part of my daily routine. When a young woman supervisor collected us at the airport and drove us to a large brick and concrete art deco building, I thought it was a hotel. In my Deliverance From Jericho (Six Years in a Blind School) memoir, I wrote of how the hard truth of my situation knocked all those naive notions out of my head. Here is an excerpt from the first chapter that tells how it happened.

I followed the rest of the boys back to the dorm after school. Doubtless, I thought, a grownup would soon be picking us up and taking us home. As it was a warm sunny afternoon, the wait was somewhat pleasant.

Becoming bored with hanging around the swings, next to the dorm, I asked one boy, "When will we be going home?” "Christmas," he said bluntly. I could not believe my ears. "You're joking!" I managed to blurt through the shock. "No, I'm not. We really have to stay here till December."

I felt utterly devastated. How could my parents betray and abandon me in such a far away place? Christmas seemed a million years away. What began as a wonderful adventure suddenly became a tragedy. I held back my tears, though I certainly felt like sobbing.

That was not the only shock I received that day. Miss Boyce sent everybody to bed at seven. I could not believe it. No one went to sleep at that hour of the evening. "This must be some sort of mistake," I thought, so I started to wander the hall.

"I told you to get back into bed!" Miss Boyce ordered.

"I want to play. The sun's still shining."

"Go back to bed and I mean it!" Miss Boyce barked.
I shuffled back into the bedroom feeling thoroughly defeated. With the sun blazing brightly outside, I closed my eyes and waited for sleep. To my surprise, I drifted off fairly quickly.

At my web page, you can read more about this memoir of my time at Jericho Hill School for the Deaf and Blind as well as my debut memoir, When a Man Loves a Rabbit (Learning and Living With Bunnies). Please contact me via the web page for further details and watch this blog for more book excerpts. I also am on Facebook and Twitter. Additionally, I have a few videos on YouTube. See you there!
Posted by Bruce Atchison - author at 11:42 No comments: Links to this post